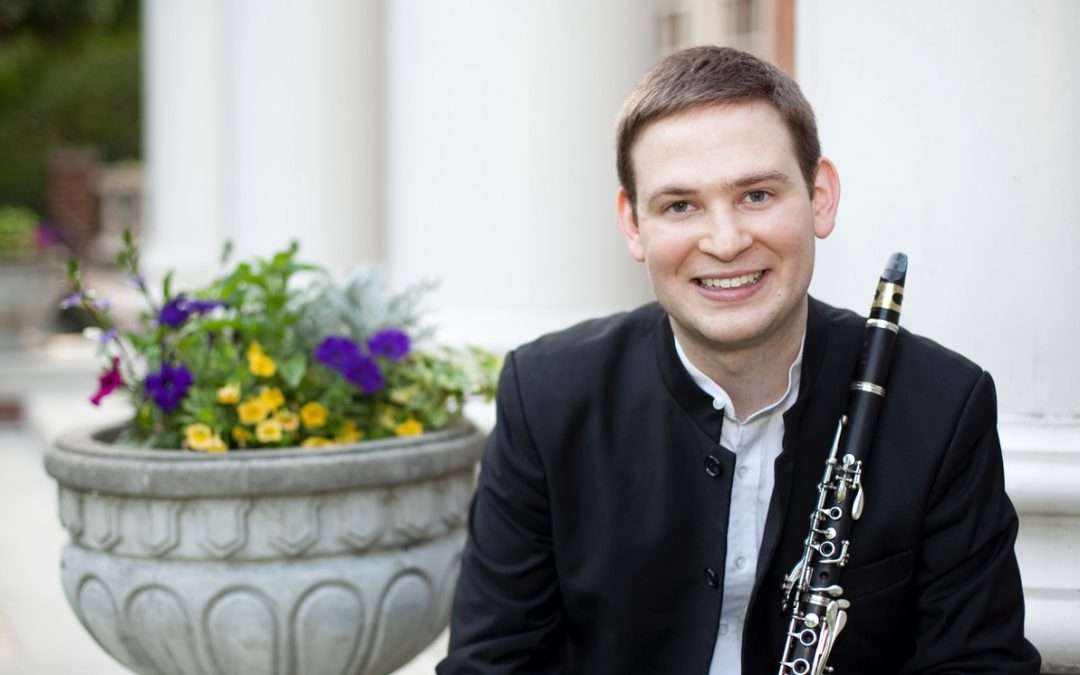 Rob Patterson, former Acting Principal Clarinet of the Baltimore Symphony Orchestra, will join with a quartet of New Asia Chamber Music Society members to play Weber’s virtuosic Quintet in B-flat and Brahms’ soul-searching Quintet in B minor. Balancing these masterpieces are an adagio by 19th century clarinet virtuoso/composer Heinrich Baermann, and a clarinet quintet fragment by Mozart, the pioneer of chamber music for clarinet.

Recognized for his “rich, luscious tone quality” (The Clarinet), Rob Patterson is quickly establishing himself as one of the most exciting and versatile clarinetists of his generation. Recent orchestral appointments include Acting Principal Clarinet with the Louisville Orchestra, Acting Principal Clarinet with the Baltimore Symphony Orchestra, Principal Clarinet of the Charlottesville Symphony and a member of the faculty at the University of Virginia.  Additionally, he has served as guest principal for the orchestras of Cincinnati, Richmond, Huntsville, and Modesto. Teaching engagements include featured guest at Morehead State University’s Clarinet day as well as masterclasses at The Grieg Academy, The Sibelius Academy, The Royal College of Music in Stockholm, the Norwegian University of Science and Technology in Trondheim, and the Norwegian State Academy of Music in Oslo. Particularly at home in chamber music, Mr Patterson’s performances have taken him across North and South America, as well as Europe and Asia. He has performed contemporary music as a member of the VERGE Ensemble in Washington, DC and was previously a member of the Philadelphia-based Ensemble 39, a mixed group of strings and woodwinds that is active in commissioning new works.  While a Strathmore Artist in Residence, Mr Patterson presented a series of solo recitals, masterclasses, educational concerts, and a recital at the John F. Kennedy Center for the Performing Arts.  Enjoying an ongoing relationship with Strathmore, he is frequently presented in recital both at Strathmore and in venues around the Washington metropolitan area.

New Asia Chamber Music Society Hailed by New York Concert Reviews as “an impressively organized and professional group… comprised of many young and gifted players”, the New Asia Chamber Music Society (NACMS) was founded in 2010 by an entrepreneurial group of young Asian-American virtuosi. Propelled by a shared passion for classical chamber music performance, the members of NACMS are prize winners of world renowned international competitions, graduates from America’s most prestigious music schools, including The Juilliard School and the Curtis Institute, and appear regularly on major stages across the globe. Based in New York City, NACMS is committed to bringing audiences exciting chamber music performances of the highest caliber and innovation. By delving into the giants of traditional chamber music repertoire, cultivating new voices of contemporary composers that meld elements of Western and Eastern cultures, and collaborating with a broad network of art organizations – NAMCS is creating a trifecta of innovation to enable new concert-going experiences for the audience. NACMS musicians who will perform in this concert Tien Hsin (Cindy) Wu, violin I-Jung Huang, violin Andy Lin, viola Mihai Marica, cello