In 1994, Daniel Malkin, a gifted 30 year-old cellist and teacher, was inspired to introduce chamber music to a broader audience by organizing concerts on Sunday afternoons in Columbia. With the help of his wife, Wonju Kim, a Baltimore Symphony Orchestra violinist, he planned the concerts, engaged the artists—all of them from among his and his wife’s colleagues—arranged for the venue, and acted as the master of ceremonies. He named the organization “Music in Common.”

Sadly, Mr. Malkin died of cancer in April, 1997 at the age of 33. Six months after he died, a group of classical music lovers and musicians gathered to discuss forming a new chamber music organization to continue what he had begun.

Sundays At Three was the product of that effort. One of its founders, Rev. James Shields, the Rector of Christ Episcopal Church in Columbia at that time, was elected its president. He offered to rent the church sanctuary to Sundays At Three for its concerts. The sanctuary is a two-story room with a balcony, an abundance of natural light, and wonderful acoustics – an excellent setting for chamber music.

A fundraiser to launch the first season took place on December 28, 1997. The program featured then 18 year-old Hilary Hahn, who had already established herself as one of the most promising young violinists in the world. She performed with pianist Eric Conway, who is currently the Director of the Morgan State University Choir and Chairperson of the Fine Arts Department. 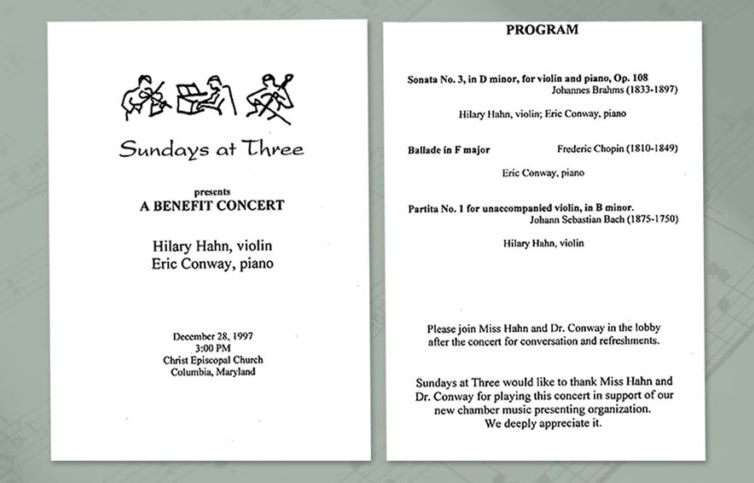 The members of the Sundays At Three board also are the volunteers who plan the season and present each concert. The performing artists and the high school music students who work at our concerts are the only people who are paid.