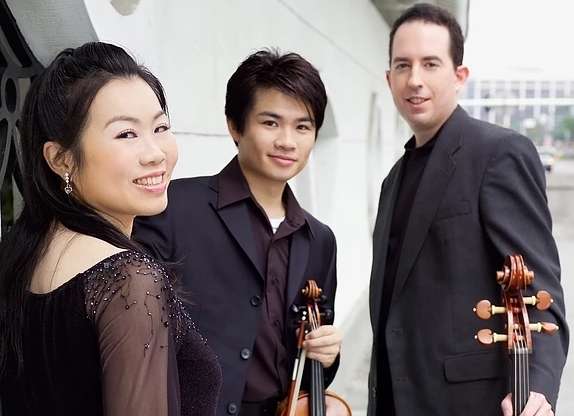 
Now in its 23rd Season, the Gemini Piano Trio will perform Beethoven’s Trio No. 3 in C minor, a piece that is a break from classical conformity. Leonard Bernstein’s Piano Trio is a nod to the centennial of his birth this year. Shostakovich’s Piano Trio No. 2 in E minor, written during World War 2 in the wake of the siege of Leningrad and the loss of his closest friend, is filled with moods of bleakness, lament, and a wild dance of destruction!

The San Diego Union-Tribune hailed the Gemini Piano Trio as “mind readers” with “almost uncanny musical closeness.” The New York Concert Review by the late Edith Eisler referred the trio as “a model of classical elegance and restraint.” The trio was also praised for their “amazing virtuosity” by Music Monthly, as well as for their Taipei debut performance that “epitomized the idiom of chamber music” by The Taipei Times.
​
The American Record Guide praised their début Ives/Brahms CD saying, “There is an admirable balance between confidence, polished technique, and impulsive, romantic ardor in this performance.” Their second album, featuring trios by Ravel and Shostakovich, released in 2003, also received rave reviews. The trio has also taken top prizes in many of the great chamber music competitions. At La Jolla Chamber Music Society’s SummerFest, the trio worked with the great artists of our time such as Cecile Licad, Cho-Liang Lin, Joseph Kalichstein, David Finckel, Wu Han, Ida Kavafian, Gilbert Kalish, and Menahem Pressler.​

In addition to a sold-out debut concert at the Taipei National Recital Hall in 2008, the Gemini Piano Trio made their debut in 2010 at Carnegie Hall, also to a sold-out house. The trio is in their 23rd season as one of the few professional all-family chamber groups.