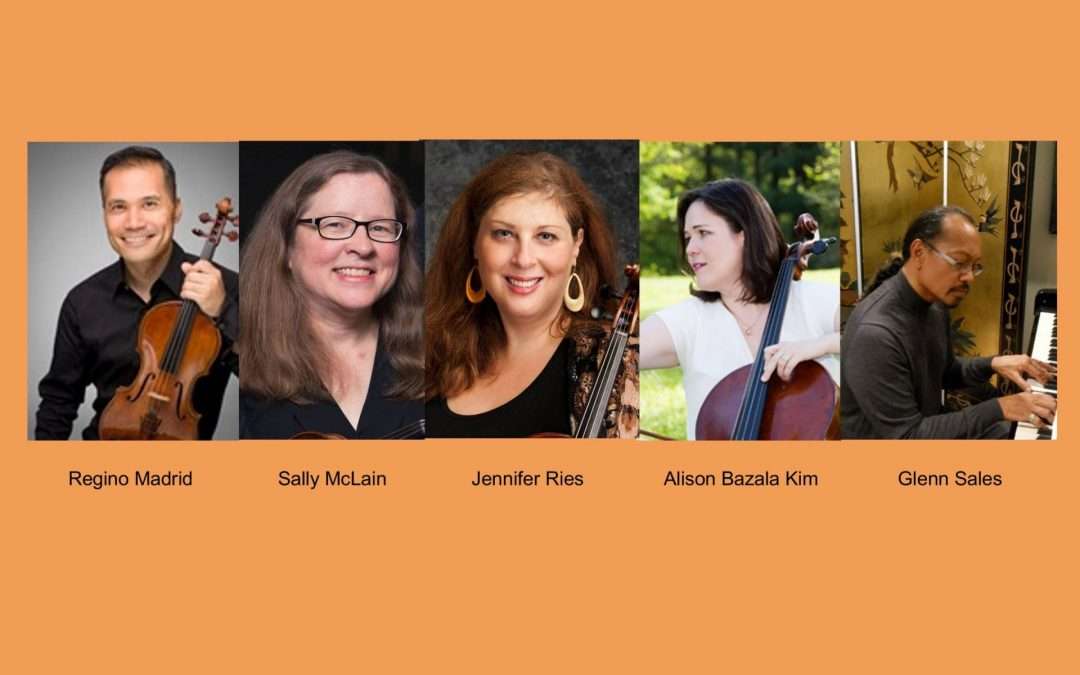 Violinist Regino Madrid is an active soloist, concertmaster, and chamber musician in the Washington, D.C. area. Madrid is the concertmaster of The American Pops Orchestra and The McLean Orchestra. He has also appeared as guest concertmaster for the Eclipse Chamber Orchestra, National Gallery Orchestra, National Philharmonic, Chesapeake Orchestra at St. Mary’s River Concert Series, the Alexandria Symphony, and the Chamber Orchestra of San Antonio. Madrid is a founding member of the critically acclaimed Teiber Trio and has played in Carnegie Hall, Lincoln Center, the Library of Congress, the Phillips Collection, and The White House. He received his music degree in violin performance from the Cleveland Institute of Music, and plays on a J.B. Vuillaume violin from 1871.

Violinist Sally McLain received her Bachelor and Master of Music degrees with High Distinction from Indiana University, where she studied with James Buswell. She has participated in the Bach Aria Festival and Institute, the New York String Orchestra and the Tanglewood Music Center. Sally was concertmaster of the Washington Chamber Symphony for ten seasons and is currently concertmaster of Washington Concert Opera and the Washington Ballet. She was a member of the Theater Chamber Players and has recorded the complete quartets of David Diamond and Quincy Porter with the Potomac String Quartet for Albany Records. Sally is currently violinist with the Left Bank Quartet and is an Adjunct Chamber Music Faculty member at the University of Maryland..

Violist Jennifer Ries, a native of the Washington area, returned in 2004 after playing in the Kansas City Symphony for nine years. During her time in Kansas City, she received a one year position teaching viola at the University of Minnesota School of Music, where she also played with the Minnesota Orchestra. She was the violist of the Beau Soir Ensemble from 2102 through 2017, and plays regularly with the Washington Ballet Orchestra, the Washington Chorus, and many of the finest ensembles in the DC area. An alumna of Oberlin Conservatory, Tanglewood Music Center and the Chamber Music Center of San Francisco Conservatory, she has focused much of her career on chamber music. A very special reunion with pianist Glenn Sales at the Washington Ballet inspired her to found the Inner Loop Chamber Players.

Cellist Alison Bazala Kim has performed in several countries, including as the first American soloist to appear in Sarajevo after the war in Bosnia. She later returned there and her concerts were broadcast. In the United States, she performs as a soloist, orchestra member and chamber musician in the Washington area, and has performed in Miami Beach, New York City, and Boston. As a member of Florida’s New World Symphony, she performed in Alice Tully and Avery Fisher Halls in New York, the Kennedy Center, and in Brazil, Argentina, Monaco and Israel. She has served as the Associate Principal Cellist of the Maryland Symphony Orchestra and currently plays with the Annapolis, Apollo and Alexandria Symphony Orchestras. Dr. Bazala Kim is currently President of the Maryland and Washington D.C. Chapter of the American String Teachers Association. She holds degrees in Cello Performance from the New England Conservatory of Music, Rice University and the University of Maryland. She also studied at the Eastman School of Music.

Pianist Glenn Sales is well-known to D.C area audiences since his National Symphony Orchestra debut at age 14 and subsequent appearances. He attended the Juilliard School and was featured in 1980 on PBS as the winner of the Beethoven Fellowship for American Pianists. He has been a guest pianist at American Ballet Theatre since 1990 and has also played for The Royal Ballet, Paris Opera Ballet, Dance Theatre of Harlem, Alvin Ailey American Dance Theater, The Washington Ballet, Royal Danish Ballet among others. Mr. Sales also collaborated with Damian Woetzel and Yo-Yo Ma in projects at The John F. Kennedy Center for the Performing Arts, public schools in the Washington area, the Hirshhorn Museum, and The White House.