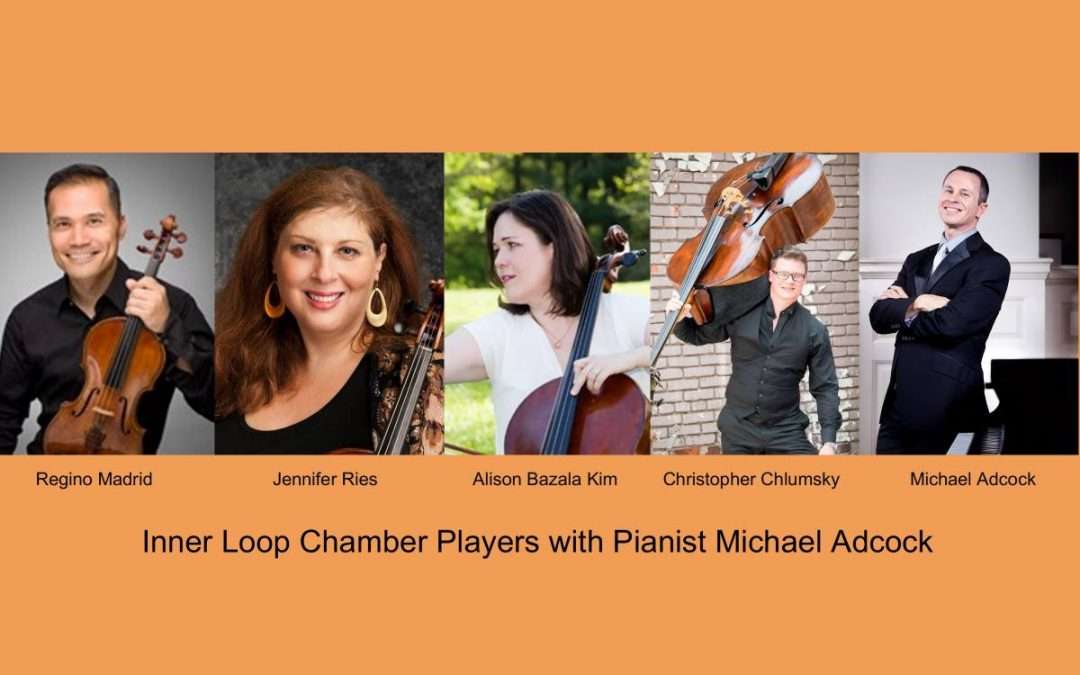 The concert will open with a premiere of Scenic Route a commissioned, festive work by JP Wogaman II. The composer will attend.

Violinist Regino Madrid is an active soloist, concertmaster, and chamber musician in the Washington, D.C. area. Madrid is the concertmaster of The American Pops Orchestra and The McLean Orchestra. He has also appeared as guest concertmaster for the Eclipse Chamber Orchestra, National Gallery Orchestra, National Philharmonic, Chesapeake Orchestra at St. Mary’s River Concert Series, the Alexandria Symphony, and the Chamber Orchestra of San Antonio. Madrid is a founding member of the critically acclaimed Teiber Trio and has played in Carnegie Hall, Lincoln Center, the Library of Congress, the Phillips Collection, and The White House. He received his music degree in violin performance from the Cleveland Institute of Music, and plays on a J.B. Vuillaume violin from 1871.

Violist Jennifer Ries, a native of the Washington area, returned in 2004 after playing in the Kansas City Symphony for nine years. During her time in Kansas City, she received a one year position teaching viola at the University of Minnesota School of Music, where she also played with the Minnesota Orchestra. She was the violist of the Beau Soir Ensemble from 2102 through 2017, and plays regularly with the Washington Ballet Orchestra, the Washington Chorus, and many of the finest ensembles in the DC area. An alumna of Oberlin Conservatory, Tanglewood Music Center and the Chamber Music Center of San Francisco Conservatory, she has focused much of her career on chamber music. A very special reunion with pianist Glenn Sales at the Washington Ballet inspired her to found the Inner Loop Chamber Players.

Cellist Alison Bazala Kim has performed in several countries, including as the first American soloist to appear in Sarajevo after the war in Bosnia. She later returned there and her concerts were broadcast. In the United States, she performs as a soloist, orchestra member and chamber musician in the Washington area, and has performed in Miami Beach, New York City, and Boston. As a member of Florida’s New World Symphony, she performed in Alice Tully and Avery Fisher Halls in New York, the Kennedy Center, and in Brazil, Argentina, Monaco and Israel. She has served as the Associate Principal Cellist of the Maryland Symphony Orchestra and currently plays with the Annapolis, Apollo and Alexandria Symphony Orchestras. Dr. Bazala Kim is currently President of the Maryland and Washington D.C. Chapter of the American String Teachers Association. She holds degrees in Cello Performance from the New England Conservatory of Music, Rice University and the University of Maryland. She also studied at the Eastman School of Music.

Double Bass, Christopher Chlumsky is a native and current Baltimorean while growing up across the state line in Shrewsbury, PA. Chris is an active freelancer and teacher in the Baltimore and DC regions largely playing with national touring musicals at the Hippodrome, National Theater and Wolftrap venues and as a substitute for shows at the Kennedy Center, Washington National Opera and electric bass sub with the Baltimore Symphony Orchestra. In addition, Chris also regularly performs with the Concert Artists of Baltimore, Alexandria Symphony Orchestra, pit band/orchestra of the Everyman Theater, pit band/orchestra of the Signature Theater, substitution with the Baltimore Chamber Orchestra, several local jazz, funk, blues, big band ensembles and also co-owner/founder of his own corporate/wedding band operation. A graduate of the Curtis Institute of Music and having the fortune of studying with the late Roger Scott, former principal of the Philadelphia Symphony Orchestra, Chris won his first position after graduation as associate principal bassist with the Sinfonica de Galicia of La Coruna, Spain. After remaining for two years, Chris returned to the US to study with Robert Kesselman of the Philadelphia Symphony Orchestra attending graduate school at the Peabody Conservatory of Music.

Pianist, Michael Adcock has cultivated a versatile career as soloist, chamber musician and pre-concert lecturer. He  received the 1998 Lili Boulanger Memorial Award, and was also a prizewinner in the 1996 Washington International Competition and the Kosciuszko Foundation Chopin Competitions in Chicago and New York. He gave his Carnegie Weill Recital Hall debut in December of 1998. In 2016, Mr. Adcock was a featured artist on Washington, DC’s WETA-FM “Front Row Washington” and has also been featured on radio broadcasts in New York City (WQXR), Chicago (WFMT), New Jersey (WWFM), Tampa, FL (WUSF), on SiriusXM, NET Nebraska (KUCV), and BBC Newshour, and on television on CTV (Canada). He earned Master’s, Artist Diploma and Doctoral degrees from Peabody Conservatory, where he studied with Leon Fleisher and Ellen Mack, and was adjunct faculty in theory and chamber music. He is currently a faculty member of Washington Conservatory in Bethesda, MD, and artistic director of the UU Chalice Concert Series in Columbia, MD.

JP Wogaman II is an American composer, producer, and musician who is most known for his arrangement of Strauss Waltzes for The Washington Ballet. A graduate of the University of Michigan School of Music, his portfolio of achievements includes working with esteemed choreographers such as Trey McIntyre, Mimmo Miccolis, and Katherine Barkman. JP’s primary musical influences are pop, rock, and orchestral. Subsequently, his music can be described as fun, fearless, and unforgiving. Currently, he is working on his first feature film score and continues to compose a wide range of music for ensembles and productions in Washington, D.C. and New York City.

The composer’s program note about “Scenic Route:” When was the last time you got in your car and went for a drive? I mean, a really long drive? Just for the fun of it; counting power lines as they pass by, or mile markers, and allowing your mind to roam free. Actually, the long road doesn’t even have to apply to a literal road. How about going up and down every aisle at the grocery store, just to see what’s new? This piece is my take on the feeling of freedom from yourself. Freedom to take all the time you want, to do whatever you want and just let go of all the pain, tension, and trepidation you may be holding inside. Enjoy the Scenic Route!”